"Positive management, for example the continued valuable contribution to the work force by the older generation, paired with pro-active measures, for example health promotion and disease management, can start to transform what some see as a looming crisis into a social revolution." 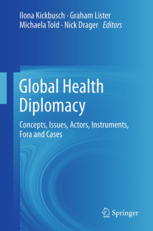 Ilona Kickbusch was appointed to chair the international advisory board on Global Health Policy by the German Minister of Health, www.bundesgesundheitsministerium.de

The advisory board presented its recommendations in summer 2019
in German and English: here.

G7/G20
She has been involved in both the G7 (2015) and the G20 (2017) German presidencies in relation to global health matters. She co-chaired the Health Crisis simulation at the G20 health ministers meeting together with David Heymann from Chatham House. Read her assessment of the G20 global health activities.

She was able to contribute to the development of the first German Federal Government’s Strategy Paper on: Shaping Global Health Taking Joint Action Embracing Responsibility through a background document. She also contributed to the Leopoldina (the German National Academy of Sciences) report on Public Health in Germany especially in relation to global health, more.

She serves on several advisory boards – at present also on the scientific advisory board for the recently established ZIG at the Robert Koch Institute - and is frequently invited to contribute to global health events in Germany. She has published on Germany's new global health role.

She is one of founders of Women in Global Health Germany www.womeningh.org/wgh-germany