"In the health society the expansion and do-ability of health is increasingly driven not by social reform or the medical expert/knowledge systems but by a new mix between the driving forces of empowerment of the citizen/consumer/patient and of the private market. The latest incarnation of these developments is the wellness revolution which marries personal health and the market: the do ability of health translates into a product that can be bought on the market." 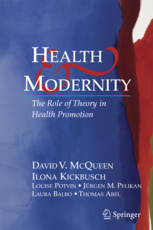 The concept of the health society allows the study of health as an exemplary area of the “consequences of modernity” in all its dimensions. It was first explored by Ilona Kickbusch on occasion of being awarded the special honour to speak in Vienna in November 2004 as part of the prestigious lecture series “Wiener Vorlesungen”.

In July 2006 Ilona Kickbusch published a book on the health society in German ("Die Gesundheitsgesellschaft"). This concept lies at the heart of her present work on health promotion and public health. It was the subject of the 2008 meeting of German speaking health and medical sociologists. The debate has been published as a special issue of the Journal of the Austrian Sociological Association.

The second edition of the Book "Die Gesundheitsgesellschaft" has been published in 2014 (co-author Susanne Hartung).

In English, the concept of the health society is explored further in the publication on “Health and Modernity: the Role of Theory in Health Promotion” edited by David McQueen, Ilona Kickbusch et al published by Springer in spring 2007.

Defining characteristics of the health society are: